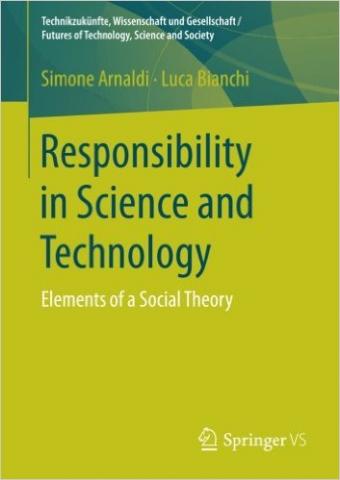 RESPONSIBILITY IN SCIENCE AND TECHNOLOGY
Elements of a social theory
Springer VS, Heidelberg, 2016

More recently, the notion of responsibility has found its way to the forefront of policy-making and academic debate on science and technology governance. But what, precisely, is meant by responsibility? Despite its increasing significance, the idea remains ill-defined.
The present volume represents a timely contribution to current endeavours at elucidating the scope of responsibility by way of assimilating insights gleaned from sociological theory and Sts and by investigating the ways in which responsibility unfolds in social processes.
Drawing on these theoretical perspectives, the volume goes on to review a ‘heuristic model’ of responsibility. Such a model provides a concise, tentative, though no less coherent analytical framework for further examining the idea of responsibility, its transformations, configurations and contradictions, thereby going beyond the mere formulation of generalized normative statements or the study and explication of individual cases.